I could eat this everyday. It’s fun to mix it up too by plopping an over easy egg on top. After the first day, the gai gra prow gets spicier and the richness of the fried egg perfectly balances the spice. I think I’ll make this tonight.

I do have two little humans at home. So, I pull half the sauce from the pan of the gai gra prow before adding the chilies and they devour it. 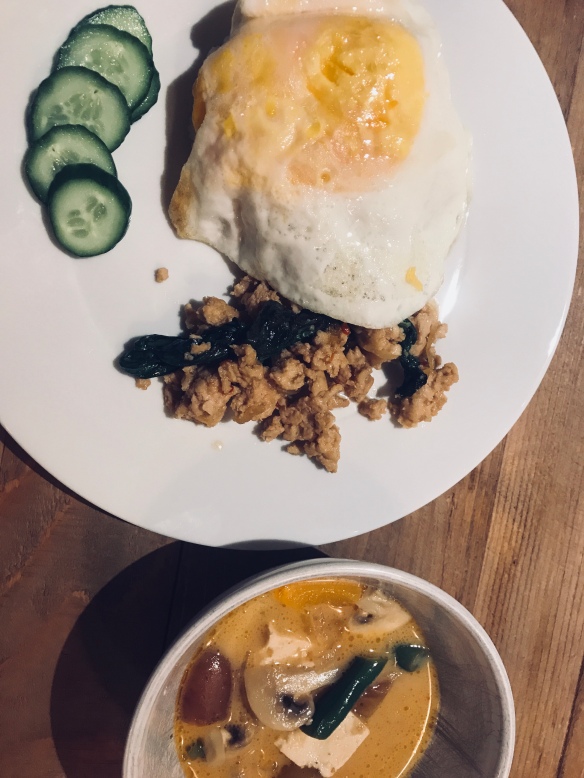 Heat large skillet over high heat. Drizzle in oil. Add chicken and stir fry until it loses its raw color, 2 to 3 minutes. Stir in shallots, garlic, and sliced chilies.

Continue cooking on high heat until some of the juices start to caramelize in the bottom of the pan, about 2 or 3 more minutes. Add about a tablespoon of the sauce mixture to the skillet; cook and stir until sauce begins to caramelize, about 1 minute.

Pour in the rest of the sauce. Cook and stir until sauce has deglazed the bottom of the pan. Continue to cook until sauce glazes onto the meat, 1 or 2 more minutes. Remove from heat.

Stir in basil. Cook and stir until basil is wilted, about 20 seconds. Serve with rice.

Heat the oil in a large pot over medium low heat. Add the onions and saute for a few minutes until the onions are fragrant and softened. Add the chicken and curry paste; saute for 3-5 minutes. Add the potatoes and stir to coat with the curry paste.

Add the coconut cream and 1/2 cup water to the pot – simmer for 20-30 minutes or until the veggies are fully cooked, adding more water depending on the consistency you want for the sauce. Stir in the tofu toward the end so it doesn’t break up.

Stir in the fish sauce and brown sugar to really take it up a notch. Seriously – so good. Serve over rice.

This is a very easy Sunday night meal that gives the best leftover chicken for the rest of the week. Cook 2 and your weeknight protein is set.

Build a fire in your grill, leaving approximately half the grilling area free of coals. If using a gas grill, turn burners to high and then, when ready to cook, turn off the burner on the side where you will place the chicken. If using an oven, heat to 425 degrees.

Combine all the spices in a large bowl, then apply the dry rub to the chicken, inside and out.

Put the beer can on a solid surface. Pick up the chicken and, taking a leg in each hand, put the cavity over the can and slide the bird down onto it. Carefully transfer the bird and the can to the cool side of your grill, its back to the fire, balancing the chicken upright and using the legs to support it in this position. If using an oven, place the chicken upright in a roasting pan using the same method and place carefully into the heat.

Cover the grill and cook for approximately 1 1/4 hours, basting with barbecue sauce twice during the final half-hour if you’d like, until the breast meat registers 165 degrees on an instant-read thermometer or until the legs are loose in their sockets. (If you’re using an oven, you can tent the bird with foil after 45 minutes to keep the skin from getting too dark.) De-can and carve.

Marinate chicken: Mince and mash garlic to a paste with 2 teaspoons salt, then transfer to a large bowl. Stir in vinegar and oregano.

Remove skin and excess fat from chicken, then toss chicken with marinade until coated and marinate, covered and chilled, at least 1 hour.

Cook chicken and rice: – Cook chorizo in olive oil in a 6- to 7-quart heavy pot (12 inches wide) over medium-high heat, stirring, until some fat is rendered, 2 to 3 minutes. Add onions, bell pepper, and garlic and cook, stirring until softened, about 5 minutes.

Stir in tomatoes, beer, broth, and rice and bring to a boil, making sure rice is submerged. [Deb note: I actually had a really hard time keeping the rice underneath the chicken so that it would cook evenly. I’d suggest that you use tongs to temporarily remove the chicken from the pot, mix the rice in with the other ingredients in the pot, and then replace the chicken, pressing it into the broth a bit before going onto the next step. ]

Reduce heat to medium-low, then cover mixture directly with a round of parchment or wax paper and cover pot with a tight fitting lid. Cook, stirring once or twice, until rice is tender, 20 to 30 minutes.

Do ahead: Chicken can be marinated up to 2 hours in advance. 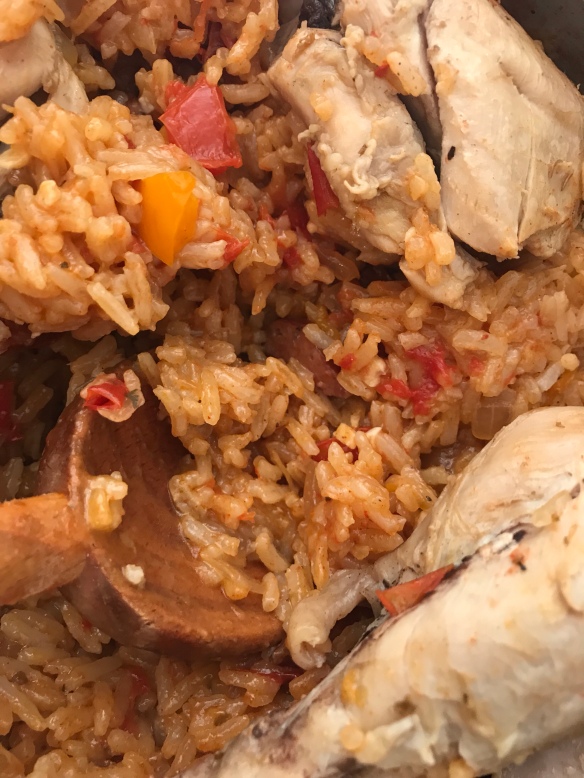